A busy weekend for Bury athletes

Last Saturday saw a number of younger Bury AC members representing Greater Manchester in two different types of events. The English Schools Cross Country Championships were held at Wollaton Park in Nottingham. Running in his first year in the junior boys, Francis Woodcock performed commendably to take 145th position in a time of 17.04 for the hilly 4.2km course. Marcus Dey was the first Greater Manchester counter home in the intermediate boys 5.7km race. He finished in 49th place (19.13) and he also has another year in the age group. 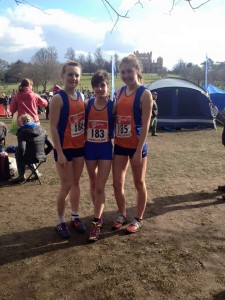 The Sportshall North West Regional Finals took place at Sportscity and the Greater Manchester team contained a large number of Bury athletes who contributed to the county winning three out of the four age group titles. For the under 13 girls Grace Goodsell won both the 2 lap race and the standing long jump competition. Daisy Worthington took 4th in the 4 lap race and finished 3rd behind Grace in the standing long jump. Charlotte Speakman-Farnworth took an excellent 3rd in the 6 lap race, level with Isobel Miller,  and finished 5th in the standing triple jump. Amy Garroch and Katherine Townsend finished 7th and 8th respectively in the speed bounce and shot events. It is worthy of note that Grace’s time in the 2 lap race (21.1) was even faster than the winning athlete in the under 15s category and her standing long jump (2.40) was 15 cm clear of her nearest rival and one of the best leaps in Sportshall in the country. 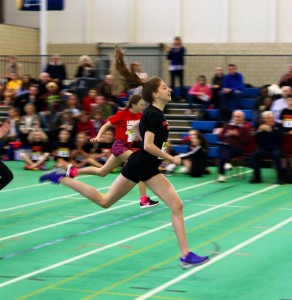 Patrick Clarke was the star performer in the under 13 boys competition, winning both the 2 lap race and the vertical jump. He was pushed hard in both events by Jerel Livingston who 2nd and 4th places in the events. Jack Andrew took 6th place in the 4 lap race and 8th in the standing triple jump whilst Joe Shore was 8th in the 6 lap race.

James Coghlan powers out of the blocks

Bury had only one athlete in the under 15 boys competition but James Coghlan competed in style. He recorded first place in the 2 lap race, where the judges recorded a dead heat between the first four finishers. He won the standing long jump with a tremendous leap of 2.67, well clear of the rest of the field and took 8th place in the speed bounce. It is worthy of note that last year the club had only three athletes in the Greater Manchester squad and their numbers this year reflect the hard work the young athletes are putting into their training and the support they receive from their coaches and parents.

On Sunday ten Bury athletes competed in the Sale Harriers indoor open event at Sportscity. Nearly all of them were rewarded with new personal bests for their performances.

In the 60m sprints Emmanuel Mufakazi and Hashim Shah won their respective races in 7.54 and 7.55, both being new pbs. It is clear that the training the two young athletes are putting in under the tuition of coach and former international athlete Etta Kessebah is paying dividends. James Coghlan finished in 4th place behind Hashim but set a new best of 7.80. Jenna Allen-Cartwright set a new best of 8.83 in her 60m and Dan Matthews recorded a time of 9.32 in his first outing at the distance. Hattie Vaughan set a season’s best time of 8.62 in her race.

Mariella Digioia took 3rd place in her 200m race with a time of 29.74. Jenna Allen-Cartwright also took 3rd in her race with a 28.41 performance. Hattie Vaughan set a new best of 27.75 in taking an impressive second in her race.

It was good to see Bury competitors in the 600m and Sam Brooks was a comfortable winner in his race with a new best performance of 1.34.9 which augers well for his prospects over 800m in the summer. Oliver Kirby took 2nd place also with a new pb of 1.40.38. Teegan Brady ducked under the 2 minute barrier with a 1.58.08 performance to take 5th in her race. Hattie Vaughan averted disaster when her pole broke in the vault competition.