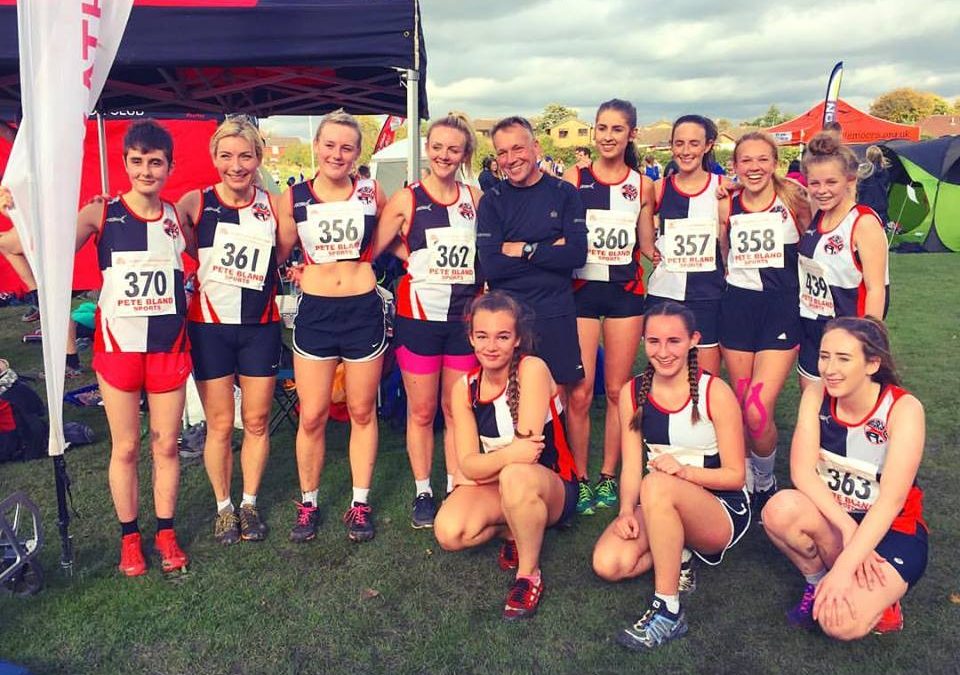 Competitors in the first Red Rose cross country league fixture of the season were treated to warm balmy conditions at the Leigh Sports Village last Saturday. Bury fielded a squad of nearly 70 athletes across the age groups lead by team manager Alison Dale.

The performance of the day came from Brandon Quinton who dominated the under 15 boys race finishing nearly 100m clear of the runner up. Supported by Jake Allen (22) and Oliver Donnelly (24) the Bury team had to settle for 5th place. Jacob Stevens (31) and Sam Kelly (42) were the other Bury runners in the race. The under 15 girls also took 5th place, with Erin Kenyon (14), Lucy Pixton (19) packing well, supported by Charlie Ireland (27).

Making her only appearance in the league this season before she headed down to Plymouth to commence her Royal Navy training, Sophie Whittaker ran an excellent race in the senior women’s event to take 2nd place. Making a welcome return to competition after an injury, Caitlin Cole, who had travelled down from her home in Scotland the previous day, took an excellent 8th place, just ahead of Katie Geelan in 9th. This result gave the Bury team second place. Christie Cook put in a fine performance to take 14th with Nicola Harland 29th. Other Bury runners included Lizzi Cheshire (34), Sophie Hill (35) and Lauren Booth (62). As under 20s the two Sophie’s and Lauren combined to win the under 20 team event.

Marcus Dey had to settle for runners up position in the under 17 men’s race, followed by Stefan Kalambouka who took an excellent 5th position. Alexander Bennett was 16th just ahead of Jack Smith (17) with the team taking 3rd place. The under 17 women’s team of Heledd Rimmer (10), Lucy Alcock (13) and sprinter Jenna Allen-Cartwright (18) took 4th place.

Ben Coop continued his fine form producing the best Red Rose performance of his career to take 3rd place. Jim Ardin was next home in 19th followed by Ben Jones, making a welcome return to the club, in 21st. Debutant Patrick Babb took an excellent 27th place with Matt Grice (58) and Giles Bennett (61) as final team counters bringing the team in a strong 4th place. Daniel Potts (130), Andy Worthington (132), Robert Lawson (133) and Alison Dale (167) were the other Bury competitors in the race.

Gilbert Vaughan ran a storming race for the under 13 boys taking 5th place. Noah Carter (18) and Oliver Horford (21) were the other counters as the team took 6th place. Jay Cook (36), Adam Coxon (40), Nathan Ardin (41) and William Merrick (46) were the other Bury finishers. For the girls, Freya Potts demonstrated her continuing improvement to take 6th, supported by Reilly Carson (16) and Grace Gibson (19) the girls took 4th team place. Connie Potts (24), Katie Rayner (30), Summer Whitfield (41), Holly Crow (47), Esther McGrath (49), Nicole Palmer (65) and Rosa Purdy (66) shoed the strength in numbers in this age category and it is good to see so many Bury vests in this age group.