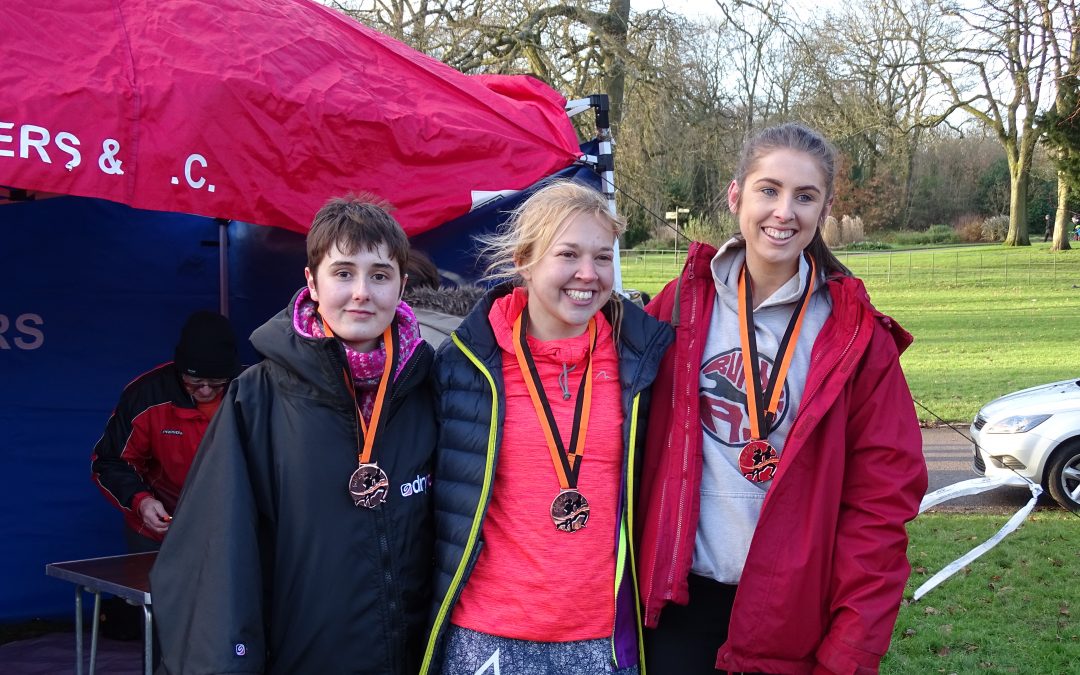 Heaton Park played host to the Greater Manchester Cross Country Championships on Saturday with competitors and spectators being treated to quite bright and mild conditions. The top individual performance from a Bury athlete came from Brandon Quinton who took the silver medal in the under 15 boys race, just 4 seconds behind the winner. His performance will see him selected to represent Greater Manchester in the Inter-Counties Cross Country in Loughborough on 10th March. Sam Kelly was the other Bury competitor in the race and he took 32nd place.

The senior women’s team packed well to take the bronze medal. Sophie Whittaker, home from leave from the Royal Navy, lead the team home in 10th place, followed by Scotland based Caitlin Cole in 15th. Christie Cook and Katie Geelan ran pretty much stride for stride and took 24th and 25th places respectively to score vital team points. Jemma Morley (52nd) and Victoria O’Brien (63rd) were the other Bury competitors in the race.

Freya Potts was Bury’s sole competitor in the under 13 girls race and she had an excellent race to take 11th place. Oliver Horford ran very well in the under 13 boys race taking 12th place with Matthew Lowe being the other Bury athlete in field who finished 26th.  Erin Kenyon was the Bury’s only competitor for the under 15 girls and took 41st place in her first year in the age group.

Andy Norman from Altrincham won the senior men’s title, but he wasn’t far in front of ex-Bury AC athlete Scott Evans running for his new club of Kingston and Polytechnic Harriers. His 5th place will assure him of a place in the Greater Manchester squad. In the absence of Ben Coop, sidelined through injury, Patrick Babb was first home for Bury in 39th place. Giles Bennett was next home in 85th, followed by Dan Potts (112th), Robert Lawson (116th) and Andy Worthington (124th).

The following day a small squad of Bury athletes competed at the Sale Indoor meeting at Sportcity. Jerel Livingston ran a new personal best of 7.66 in the 60m sprint . Jay Cook was another young athlete to bring down his best time in the event with his 9.13 performance. Abigail Howard continued the trend setting a new lifetime best of 8.67 in her race as did Ella Hall with a new best of 9.11 and Erin Garroch with her new pb of 9.52. Amy Garroch was unable to beat her existing personal best, but did set a season’s best time of 8.79.

Jay Cook, Amy Garroch and Abigail Howard all raced over 60m hurdles with Jay and Amy being rewarded with new personal bests (11.29 and 10.08 respectively) whilst Abigail set a season’s best of 10.43. Jay, Abigail and Amy also competed in the high jump; once again setting new lifetime best performances of 1.40, 1.25 and 1.25 respectively.

Jerel Livingston competed in his favourite long jump event setting an impressive season’s best of 5.72. Daisy Worthington sharpened up for her combined events by competing in the shot and setting a new personal best of 10.75. Ella Hall also set a new best performance with her furthest putt of 8.78.