The first categories of trophies to be presented were the coach awards going to athletes in the different age groups. For the under 11s the recipients were Finley Collings and Nyah Coates; the under 13s went to Jay Cook, Gilbert Vaughan and Freya Potts and the under 15s Brandon Quinton and Daisy Worthington. In the older age groups the winners for the under 17s were Stefan Kalambouka and Hattie Vaughan; the under 20s Sophie Whittaker and Josh Birmingham; the seniors Ben Coop and Lizzi Cheshire and the masters Giles Bennett and Katie Geelan.

Next awards were presented to the winners of the seniors Grand Prix competition. Ben Coop won the men’s competition with Byron Edwards winning the master’s award. Katie Geelan was the women’s champion with Alison Dale taking the master’s prize. 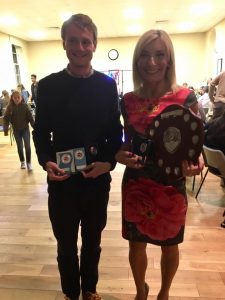 The team manager’s awards were then presented. For the YDL Lower League competition, the winners were Gilbert Vaughan and Katherine Townsend. The YDL Upper League awards went to Sam Pakes and Charlotte Larkin. Bury has performed well in this year’s Cheshire League competition and team manager Brianne Turner chose Thomas Mahoney and Hattie Vaughan as her stand out athletes. Giles Bennett, the North of England League team manager had reported how difficult it had been to pick winners as there had been many excellent performances, but ultimately he selected Emmanuel Mufakzi and Nicola Quick as the winners.

The committee’s special awards were then presented. The JT Ratcliffe award for the most competitive athlete was awarded to Jay Cook who had competed in over 70 events in a Bury vest. The Sandra Newton Memorial Award for the best field event performance went jointly to Grace Goodsell and Roger Morley who are both ranked 6th in the country for the triple jump in their respective age groups. The Best Club Member award went to Alison Dale who works tirelessly for the club, coaching, officiating, competing and volunteering. The Most Improved Athlete award went to Ben Coop.

A draw was then held for the club’s allocated place in the London Marathon, with five names going into the hat, all of whom had not made the initial ballot. The winner was Colin Smith.

Finally, the AAA grade certificates and badges were presented, with 29 athletes achieving at least one of the standards. The following grades were achieved: