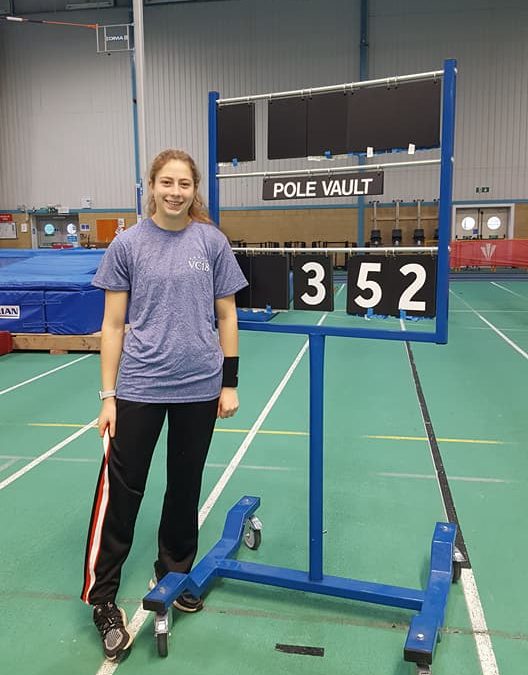 Hattie Vaughan made the long journey to compete in the Vault Cardiff specialist competition on Sunday. However, the journey was worthwhile with Hattie making a massive 10cm improvement on her personal best, raising it up to 3.52m. This height moves the Bury athlete up to 2nd in the UK for her under 17 age category in the pole vault event and the video of her effort shows her well clear of the bar indicating the young athlete has the potential to go even higher.

Men’s captain Byron Edwards competed in the Four Villages Half Marathon over in Helsby on Sunday. He made light of the atrocious weather conditions to take 49th place in the huge field and finishing 9th in his M40 age category. His time of 1:22.44 was a minute and a half faster than his previous best for the course and was impressive given the snow and slush on the course.

On the same day, seven of Bury’s younger athletes competed at the Sale Indoor meeting at Sportcity and all were rewarded with personal best performances. Jena Dickinson took 3rd place in her heat of the under 15 girls’ 60m, in a lifetime best of 7.76. In the under 17 women’s 600m Charlotte Speakman-Farnworth took 3rd place with a new best of 1.45.16. Daisy Worthington and Amy Garroch took 2nd and 3rd in the under 17 women’s 60m hurdles setting new personal bests of 9.63 and 9.75 respectively. Jay Cook, competing in the under 15 boys’ hurdles event took 4th in a new best of 11.27. In the under 15 girls’ races, Abigail Howard took 4th in her heat with a new best of 10.10, whilst Ella Hall set a seasons best of 11.89 to take 5th in her race.