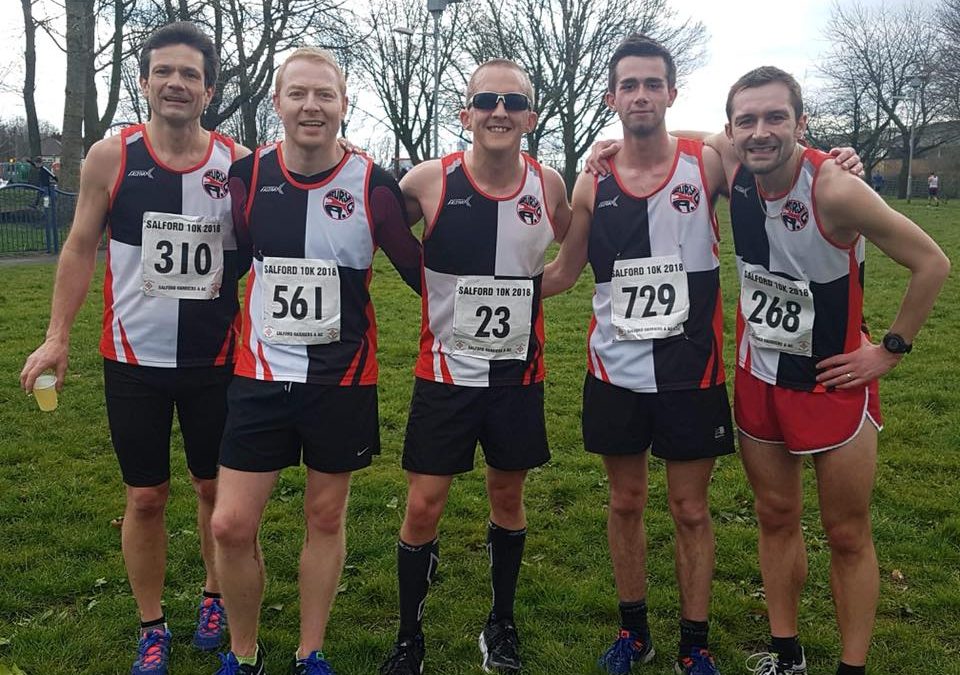 Seventeen athletes from Bury AC competing in the Salford 10k road race on Good Friday. The flat course and good conditions resulted in a number of new personal bests being set. The first to cross the finishing line in a Bury vest was Byron Edwards, who smashed his pb by over a minute, recording a time of 34.40 in finishing 10th in his V40 age category. Byron is in the form of his life and the performance sets him up well for April’s London Marathon. Next home was Ben Jones, taking nearly 30 seconds off his previous best in a time of 35.37. Josh Birmingham was another Bury runner to set a new lifetime best, taking over a minute and a half off his previous best in a time of 37.08. Paul Johnston was hot on Josh’s heels and his finishing time of 37.43 took over a minute off his previous best time for the distance. Next came Chris Mackay, crossing the line in 38.32, again a new personal best from a Bury athlete.

Giles Bennett was the next Bury finisher and whilst his time of 39.22 was not a new best, it was good enough to secure him 8th place in the V50 age category. Anthony Hallahan, in his first outing over 10k, ran very well to record a time of 40.14. Katie Geelan was Bury’s first women finisher in 40.16, a run that gave her 2nd in the F45 category.

Sophie Whittaker took on the Howgill Fell race at Sedbergh on the same day as the Salford 10k. A monster of a course of over 14 miles with nearly 7000 feet of climbing it is truly a leg sapper. Sophie completed the course in just over 4 hours and described the experience as ‘horrendous’.