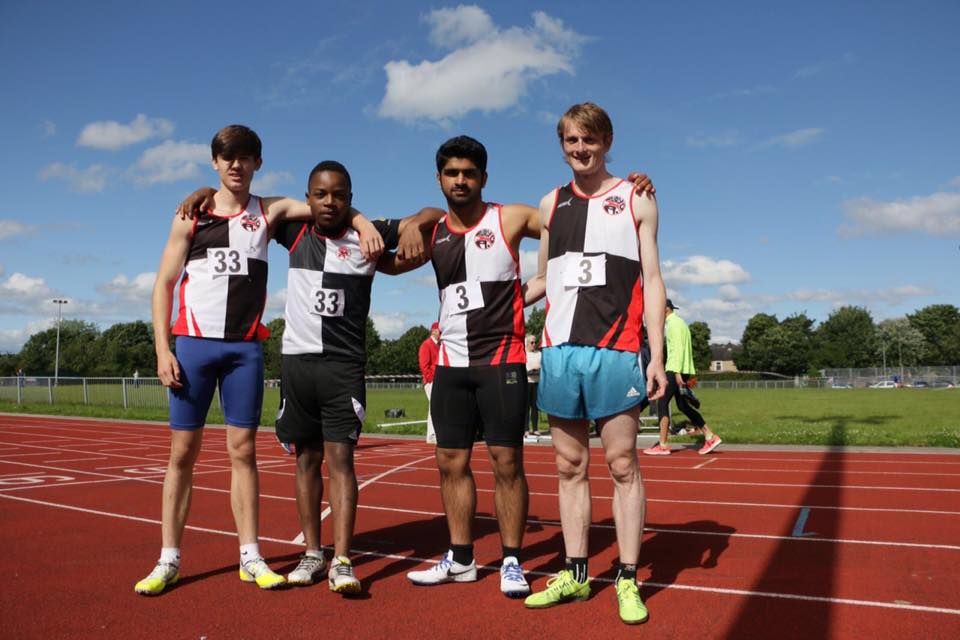 The second fixture of the Division 2 (West Central) North of England Track and Field League was hosted by Bury AC at the club’s Market Street track. The local athletes put in a battling performance to take fourth place overall and to consolidate their overall league position in fourth spot.

Ben Coop ran a swift 52.0 to take 3rd in the A 400m which he followed up with a 1.59 800m (3rd A); 4.89 B long jump and then leading off to help the 4 x 400m relay team to 4th. It was encouraging to see some of the younger athletes establishing themselves in the squad with James Coglan, Jack Olds-Bellucci, Oliver Kirby, Teegan Brady, Charlotte Larkin, Lucy Alcock, Heledd Rimmer and Jenna Allen-Cartwright all scoring critical points for the team.

The men’s 4 x 100m relay team of Emmanuel, Hashim Shah, Mike Hunter and James Coglan took 4th place in a tight finish that saw them cross the line just 0.6 of a second behind the winning team. Sadly the women’s sprint relay team did not finish with Jenna pulling up injured. The women’s 4x400m of Christie, Teegan, Lauren Booth and Sophie took an excellent 2nd place.

The second  YDL Upper match at Stockport was held the previous weekend and the Bury team were greatly affected by the Great Manchester Run, the half term holiday and the pressure of exams.  For those that did turn out it was a long grey day which was not made easier by the fact that there was a distinct lack of officials.

There were some really good performances from Marcus Dey, Ollie Makinson, and Sam Pakes , whilst Stefan Kalambouka , Charlie Obank, Heledd Rimmer, Hattie Vaughan, Charlotte Martin, Charlotte Larkin and Jack Olds-Bellucci battled through events  they were either unfamiliar with or were unsuited to score points for the team.

There were plenty of wins to celebrate, including those from Sam Pakes, Jack Olds-Bellucci, James Coglan, Marcus Dey, Ollie Makinson, Stefan Kalambouka and Hattie Vaughan.  There were plenty of good performances and great team spirit from the whole team.  Chalie Obank and Michael Thornton made their debuts for the club and were valuable additions to the squad. Team Manager Helen Vaughan named Hannah Holland as her athlete of the match as she happily competed in every event asked of her.