Bury out in force at Leigh Red Rose 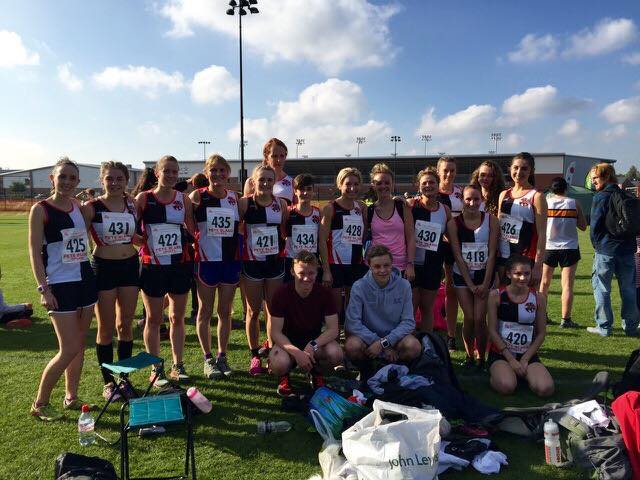 Athletes competing in the first Red Rose Cross Country League fixture at Leigh’s Sports Village were treated to almost summer like conditions for the flat and fast course last Saturday.

The first race of the day was the under 11 boys’ competition with Bury having 9 runners in the field of 80 young athletes. In a sprint finish Harry Yates took 3rd place recording the same time as 4th placed Noah Carter. Finley Collins was Bury’s third finisher in 33rd place, securing fourth team place for Bury. The other runners for Bury in the race were Joe Gould, Harry Andrew, Tom Gibson, Sam Gould, Dylan Harris and Jake Norton.

In the under 13 girls’ race Erin Kenyon produced one of her best races to date for Bury to take 5th place, with Freya Potts hot on her heels in 9th. Bury’s next scoring finisher was Lucy Pixton in 23rd to take third in the team placings. Bury’s other finishes included Grace Gibson, Abigail Howard, Ella Hall, Catherine Russell, Holly Crow, Rachel Alcock and Lauren Entwistle.

Francis Woodcock took 6th place in the under 15 boys’ race with Brandon Quinton making an excellent debut in 8th and Oliver Donnelly (16th) to secure third team place. Jacob Stevens was the other Bury competitor in the field.

For the under 15 girls Charlotte Speakman-Farnworth ran well to take 6th place, with Daisy Worthington 13th and Heledd Rimmer 18th. This gave Bury fifth team with other finishers being Ellie Carter, Charlotte Smith and Ruby Stanley.

Marcus Dey lead the Bury under 17 men to team victory taking 2nd place with Oliver Makinson next in 3rd. Alex Bennett’s 16th place secured the team victory by just one point. Jack Smith was the other Bury finisher.

The under 17 women team of Lucy Alcock, Jenna Allen-Cartwright and Teegan Brady took third place with Lucy running well to finish in 7th and sprinters Jenna and Teegan coping well with the distance to take 13th and 15th respectively.

The following day Ben Coop was running again in the Manchester Half Marathon. Enduring the heavy rain Ben ran round with Bury team-mate Mark Johnson to pace him to a good time. The tactic worked with Mark recording an excellent time of 1:28.24 and taking 16th place in the V50 age category.