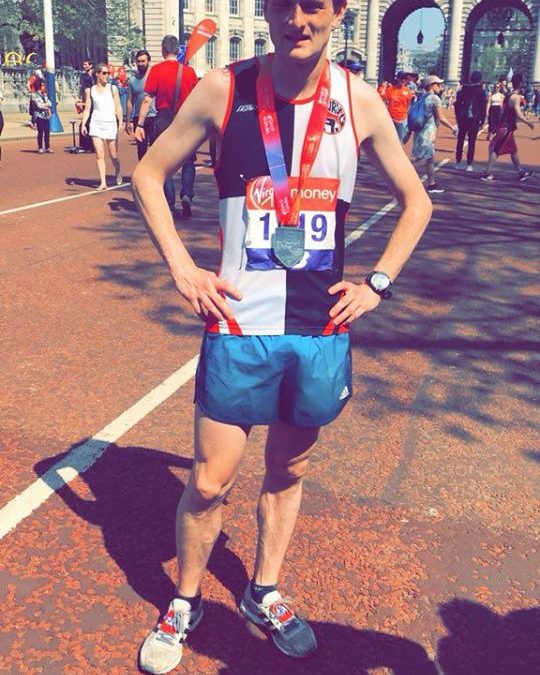 The track season arrived with a sizzle at Saturday’s Youth Development League (Lower) fixture held at the Leigh sports village. The Bury team, despite fielding a number of athletes making their competitive debuts, finished in an excellent 2nd position with 500.5 points, behind Southport Waterloo. Thet were just 0.8 of a point ahead of the composite North Cumbria team, clear evidence that every single point counts. The League provides competition for young athletes in the under 15 and under 13 age categories. Team manager Ruth Worthington was delighted with the performance from the youngsters and the vital support from their parents.

For the under 15 boys, Rashaun Currie produced an excellent series of performances, winning the B 100m and hammer events and taking 2nd in the B 200m. Jay Cook also scored vital points taking 2nd in theA shot, 3rd in the B long jump and 4th in the B high jump. Natan Witkowski, Luke Moyle, Jacob Allen and Oliver Rostron also competed in 3 individual events. Gil Vaughan, Ben Redmond and Ben Chadwick all competed well for the club and, along with Joseph Critchley took 5th in the 4 x 300m relay. Jacob, Natan, Rashaun and Luke had to settle for 6th in the sprint relay.

In the under 15 girls competition some of the best performances for Bury came in the field events with Erin Kenyon (B javelin), Ella Hall (A shot), Holly Crow (B hammer), Alice Lawson (B discus) and Emily Chadwick (A hammer) all winning their events. Jena Dickinson, Rosella Togo, Grace Gibson, Charlie Ireland and Erin Garroch all had busy afternoons competing in several events. Ella, Rosella, Holly and Jena took 6th in the sprint relay whilst the two Erins, Charlie and Grace took 4th in the 4 x 300m relay.

Noah Carter and Peter Gardner both competed in 4 events for the somewhat depleted under 13 boys’ team. They were supported by William Merrick, Adam Coxon, Oliver Harford, Finley Collings and Jayden Barlow on the track and field. Noah teamed up with William, Finley and Adam to take 5th in the 4 x 100m relay.

The under 13 girls’ team was also light in numbers requiring everyone to compete in more than one event. Mae Gardner, Connie Potts, Nyah Coates and Esther McGrath were the highest point scorers. Millie Uprichard, Isabel Lawson, Reilly Carson and Devonne Samuels all produced vital performances and the girl’s sprint relay team of Connie, Devonne, Isabel and Millie took an excellent 3rd place in their race.

The heat was also on for the six Bury AC members who competed in Sunday’s London marathon. The scorching weather together with an on-going hip injury ruled out any likelihood of Ben Coop performing to his potential. However, he gamely took part and savoured the experience of his debut at London, recording a time of 2:56.27 for the distance. Very close behind Ben came mens’ team captain Byron Edwards. Using his experience to great effect Byron judged his pace carefully and revised his original race plan to take account of the conditions. He was pleased with his 2:57.52 performance. Making her debut over the distance, Beverley McAuley coped well with the conditions to finish in 4:14.43, followed by Colin Smith (winner of the draw for the club’s guaranteed place in the event) who recorded a time of 5:17.22. Colin had been on schedule to complete the race in 4 hours when he suffered a collapse with just over a mile remaining and was treated by medics for over an hour before they permitted him to continue to the finish. Louise Shield and Jacqueline Del Pistoia from Mandy Brady’s development group ran the course together, finishing in 6:00.49 and having to endure the hottest part of the day! Louise reported that she loved every second of the race.

In slightly cooler and damper conditions, 5 Bury AC runners took part in the Bolton 10k from Leverhulme Park. Ben Jones ran strongly to take 4th place overall in 37.59. Next Bury finisher was Katie Geelan in 43.35 and taking first V45 place. Victoria O’Brien was pleased with her new personal best of 50.42, holding off Ed Hitchin whose 51.05 brought him home as first V70 finisher. Pam Hitchin completed the course in 54.30.

Next weekend Bury will host the first meeting of the Youth Development League (Upper) track and field competitions for athletes in the under 17 and under 20 age categories.