Bury AC athletes competed against the best in the country over the weekend, with Daisy Worthington taking the English Athletics 800m title in the under 15 girls 800m at Sheffield. Daisy dominated the race finishing nearly two seconds clear of second placed Hannah Roberts from Bracknell and setting a new personal best of 2.16.41, nearly 4 seconds faster than her previous best. Her winning time ranks Daisy as second fastest in the UK for the event this year. A talented multi-event athlete, Daisy’s performances over 800m this year point to where he real potential lies.

Grace Goodsell missed out on a medal in the under 15 girls 60m sprint but was rewarded with a new personal best for the event. Grace won her heat in 8.03 and took 2nd place in her semi-final in a new best of 7.87. However, she did not make the best of starts and had to settle for 5th place in the final in a time of 7.90. The semi-final performance currently ranks Grace 6th in the UK rankings.

Hattie Vaughan was the other Bury athlete to complete in the English Indoor Championships and despite struggling with the effects of a very bad cold she managed to produce a vault of 3.20 to take 8th place in the under 17 girls pole vault. Hattie remains in 8th place on the UK rankings and it is a brilliant achievement for the club to have so many young athletes who rank in the top 10 nationally.

Whilst Daisy, Grace and Hattie enjoyed the shelter of the indoor arena the team of Bury athletes who travelled to Wollaton Park in Nottingham to compete in the English Cross Country Championships faced a gruelling course including the infamous ‘swamp’. Top performance of the day came from Oliver Makinson in the under 17 men’s race where he took an excellent 28th place (21.41). Sophie Whittaker was another Bury athlete to take a top fifty finish, coming home in 45th place (25.48) in the junior women’s event. Brandon Quinton took 97th place (16.13) in the under 15 boys race from a field of nearly 400 runners. 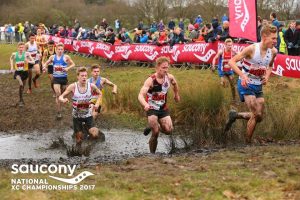 Ollie emerges from ‘the swamp’

In the massive senior men’s field of nearly 2000 runners, Ben Coop ran an excellent race to take 259th place (45.59) and Pierre Louis-Statsenko ran strongly to take 825th (52.56). In the under 15 girls race there were brave performances from Charlotte Speakman-Farnworth (273), just 3 seconds ahead of Ellie Carter (278) with Heledd Rimmer taking 402nd place. In the under 13s races for the boys Noah Carter (320) and Jack Andrew (335) both ran well. For the girls Freya Potts (234) and Grace Gibson (335) both produced excellent performances in the field of nearly 500 young runners. 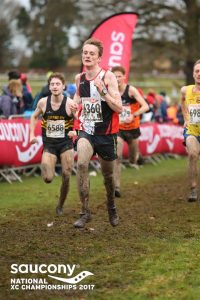 Ben driving to the finish