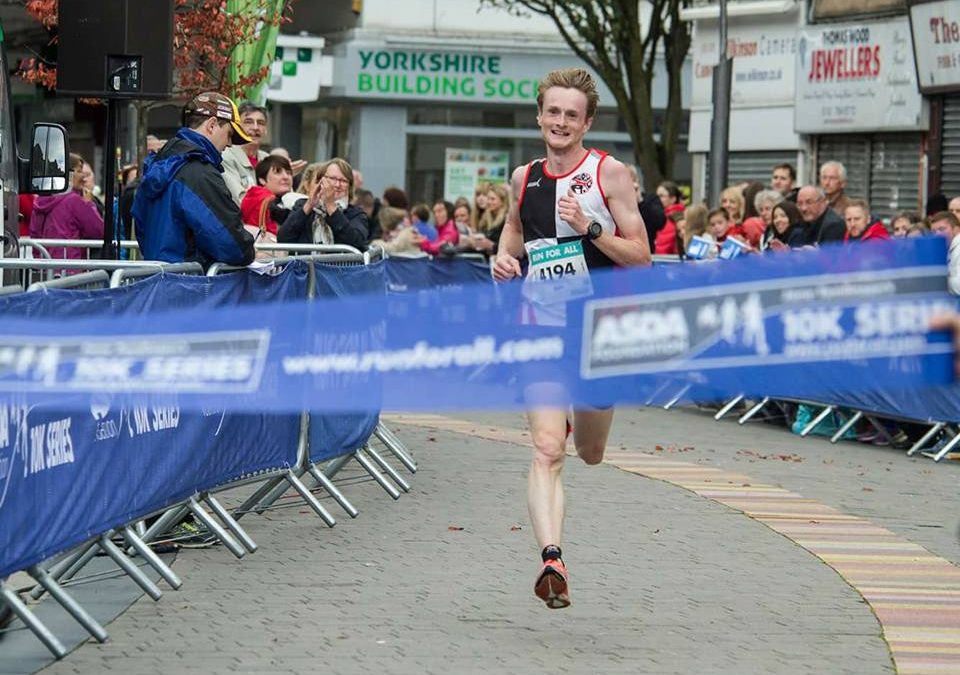 It was a busy weekend for Bury athletes with Northern Road Relays taking place on Saturday at Sportcity and the Asda Foundation Bury 10k on the Sunday. The challenge was clearly not beyond Ben Coop and Sophie Whittaker with both setting the fastest legs for their respective teams on the Saturday and then winning the men’s and women’s races in the 10k race the following day.

The Northern Road Relays sees the very best of distance athletes in the region competing for their clubs. The best Bury team performance of the day came from the under 13 girls A team who finished in 14th place. Grace Gibson opened on the first leg, handing over to Scarlett Hamilton after 14.10, with Scarlett (13.58) moving through the field to hand over to Freya Potts on the last leg who once again cut through the field with her time of 12.52 being 11th fastest of the day. The B team of Jenna Dickinson, Connie Potts and Holly Crow ran well to take 40th place. The under 13 boys team of Gilbert Vaughan, Jay Cook and John Murphy finished in 39th place.

The Bury performance of the day once again came from Brandon Quinton who led the under 15 boys team home in first place on the opening leg. His time of 10.38 was the fastest by any athlete in the age category and underlines his status as one of the best young distance runners in the country. Brandon handed over to Oliver Donnelly (12.48) who understandably had to let some teams get by him before giving the last leg to Sam Kelly whose 13.55 effort saw the team finish in 32nd place. Sadly the under 15 girls were unable to field a complete team, but Erin Kenyon and Ella Hall both ran well.

The under 17 women’s team of Heledd Rimmer, Lucy Allen and Lucy Alcock took 20th place and the under 17 men’s trio of Oliver Makinson, Stefan Kalambouka and Alex Bennett finished 24th with Oliver’s 11.34 being one of the top 20 fastest of the day in a very talented field.

Bury had several athletes competing in the Asda Foundation Bury 10k with others helping with the marshalling of the event. Ben Coop dominated the race, finishing the race in 32.58, over a minute clear of the runner up. Sophie Whittaker set a new best of 38.16 to win the women’s race nearly 45 seconds ahead of the next women finisher. Coach Luke Harreld led by example taking 5th place in a time of 35.39. Next came Jack Griffiths in a pb of 38.09, Joshua Birmingham in 38.48 and then Matt Grice in 38.55. Mark Johnson recorded a season’s best with 39.58 ahead of brothers Connor and Thomas Mahoney (41.46 and 43.23 respectively). Other Bury finishers in the massive field of over 1600 runners included Irfan Qureshi, Mark Simkins, Ed Hitchin, Siobhan Guy, Pam Hitchin, Mark Ascroft, Alison Dale, Harvey Wiseglass, Peter Henderson and Sam Booth.

Rounding off a busy weekend, Bury AC hosted the Northern Masters track and field championships at the Market Street track. As well as assisting with the smooth running of the event, club vice-chairman Roger Morley also found time win the V60 triple jump competition. There was a silver lining for Giles Bennett, who took silver medals in the V50 100m and 800m, but went one place better in the 400m to take the Northern Masters title.