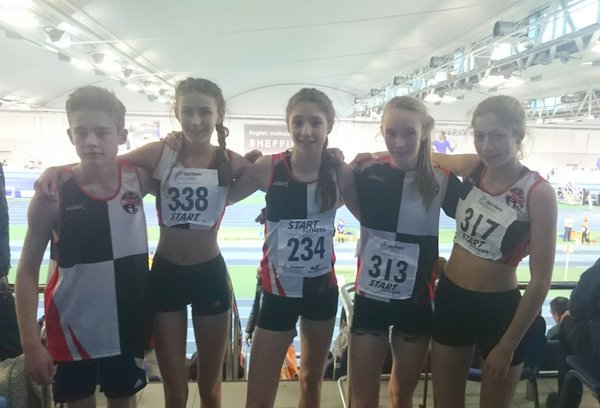 A small group of Bury athletes made the journey across the Pennines to compete in the Northern Athletic Indoor Championships for under 15 and under 13 year olds at Sheffield. In the under 15 girls 60m sprint Bury had three competitors in the heats. Grace Goodsell won heat 6 in a new pb of 8.25, ahead of Katherine Townsend who also set a new best of 8.71 in taking 4th. Hattie Vaughan produced a run of 8.80 to finish 5th in heat 8. Grace took 2nd place in her semi-final, showing her consistency with a run of 8.26 to qualify for the final. The cumulative effect of her efforts over the day impacted on Grace in the final but she ran a strong 8.32 to finish 7th overall.

Daisy Worthington shrugged off the effects of the previous day’s cross country race to set a new pb of 2.29.45 in heat 1 of the under 15 girls 800m. Her 2nd place qualified her for a semi-final place and Daisy ran bravely to take 4th place with a time of 2.35.67. Making it a busy afternoon Daisy also competed in the 60m hurdles where she set a new pb of 10.32 to take 2nd place in heat 2. In the semi-final Daisy took 6th place returning a time of 10.52.

Hattie Vaughan demonstrated the benefit of her specialist training by setting a new pb of 2.50 in the pole vault to take 6th place albeit equalling the height of the vault of the 4th placed athlete but losing out on count back.

Patrick Clarke recorded a season’s best leap of 4.33 to take 16th in the under 15 boys long jump competition. In the girl’s event Grace Goodsell set a new pb of 4.76 to take 5th in her semi-final, a position that was high enough to take her into the final. Grace produced a massive jump of 4.97 to take 4th place in the final, a leap that moves her up into 12th place in the UK in her age group.