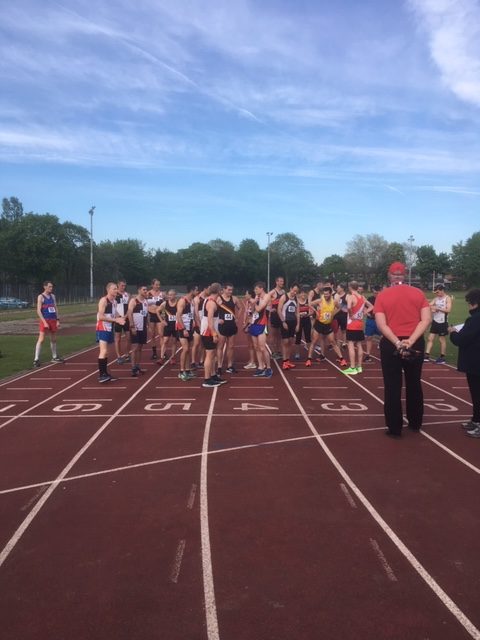 The weather conditions proved perfect for Bury AC’s inaugural 10,000 m track race. 26 competitors started with Ben Coop taking an early lead from Altrincham’s Dave Norman and Salford’s Paul Bannister. Five laps in it looked like the first three was already decided but the chasing group comprising of Herne Hill’s Bryn Reynolds and Bury’s Josh Birmingham, Jon Evans, Byron Edwards and Luke Harreld slowly started to close the gap on Paul Bannister. Ben Coop continued to pull away from the rest of the field and by the 5k mark he was nearly 100m ahead of Dave Norman.

Bryn Reynolds started to raise the pace in the chasing group and they closed the gap on Bannister at the expense of losing Byron Edwards and Luke Harreld. Josh Birmingham then took up the pace and gradually Dave Norman was reeled back in leaving the group of Birmingham, Reynolds and Norman battling it out for second place. Ben Coop had extended his lead to over 150m but at the bell it was clear that the battle for second was going to be between Birmingham and Reynolds although Norman was tenaciously attempting to hang on to them.

Ben Coop could relax over the last lap as his lead was clearly unassailable but Birmingam, Reynolds and Norman could not enjoy this luxury. With 300m to go Birmingham made his move and accelerated away from Reynolds who in turn pulled away from Norman. Josh Birmingham was delighted with his second place and ducking under 34 minutes for the first time. Paul Bannister hung bravely onto fifth place with Jon Evans setting a new best in sixth, Byron Edwards in seventh and Luke Harreld holding off a fast finishing Leo Loughran to take eighth.

Hannah Price ran strongly to win the women’s race and just missed out in ducking under the 40 minute barrier. Caitlin Cole set an new personal best in taking second and at one stage appeared to be closing the gap on Hannah Price but she had to settle for the runner’s up position. Katie Geelan produced her customary brave run to take third.

The full results can be seen by clicking on the link below.

The club extends its thanks to all the volunteers and organisers for making this a successful event and one which will feature in the fixture list for next year.