Great runs in North of England Road Relays and 5k

Birkenhead Park over on the Wirral was the venue for Sunday’s Northern England Road Relays and 5k Championships. Brandon Quinton provided the standout performance of the day taking a very creditable 4th place in the under 15 boys’ 5k race in a time of 16.29. The result demonstrates Brandon’s improvement following from his 10th place in the previous year’s event. Stefan Kalambouka ran strongly to finish in 15th position in the under 17 men’s race, recording a time of 17.47 in his first year in the age group.

In the senior’s relays championships the Bury womens’ A team took an excellent 19th place in the 6 stage event. The team couldn’t quite match the 16th position they achieved in 2017, but it was a brilliant performance given the team was a little depleted.  Bury also fielded a B team, but with only 3 athletes they did not finish as a complete team. Sophie Whittaker took on the very competitive first leg for the A team, taking 18th place in 29.35 for the long stage. Vicky O’Brien brought the B team home in 48th with her 36.47 effort. Katie Geelan ran strongly in the second leg, with her 15.13 short stage leg moving Bury up to 17th whilst Brianne Turner moved the B team up to 46th with her 19.25 split. Bev Mcauley ‘s third leg of 16.48 saw the A team drop 2 places and Nicola Brown, the final B team runner bringing them back in 45th with her 19.45 leg. Caitlin Cole took on the fourth leg, a long stage, and produced a time of 32.21 having to concede 2 places. Nicola Harland ran the fifth stage completing the stage in exactly the same time as Bev (16.48) and moving the team back up to 19th. Women’s team captain Lizzi Cheshire took on the last leg and produced one of her best distance runs ever, holding on to 19th and recording 16.39. 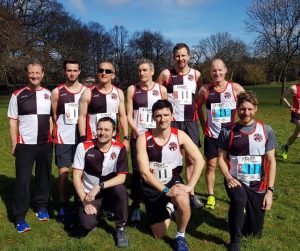 Some members of the men’s team

The men’s relay was over 12 stages, with the first, third, fifth and seventh stages long and the others short. Luke Harreld lead the team off on the first leg, bringing Bury home in 45th in a time of 27.46. Ben Jones took the next stage and moved the team up to 41st in 13.14, the fastest by a Bury athlete on the day. The third stage was completed by team captain Byron Edwards and he moved the men up to 40th place with a 27.03 leg. Super veteran Giles Bennett held onto 40th with a 14.20 stage handing over to Patrick Babb who had to drop 4 places with his 28.54 leg. Young Josh Birmingham held onto 44th with his 13.50 sixth stage whilst Jim Ardin, on the last of the long stages, moved the team up to 41st with his 26.16 split. Paul Johnson ran strongly to maintain the team in 41st place and stopped the clock at 14.00 as he passed over to eighth stage runner Jack Griffiths whose 14.25 stage moved the team up to 39th. Chris Burrows defended the position with his 15.20 10th stage with Andy Worthington unable to stop two teams passing him with his 15.43 effort on the penultimate stage. Colin Smith ran the final leg, bringing the team home in 42nd with his 17.30 stage. Given that Bury were missing some strong runners a top 50 place was a good outcome.

Some of Bury’s younger athletes had been selected to represent Greater Manchester at the regional Sportshall Athletics Championships at Sportcity. Jerel Livingston helped the under 15 boys team to 3rd place whilst Natan Witkowski and William Merrick represented the under 13 boys who took 4th. Alice Lawson and Erin Garroch competed for the under 13 girls team who took an excellent second place. Bury also had 3 under 11 competitors, with Peter Gardner, Nyah Coates and Leah Hancock all performing well.