Running in the A under 15s 800m race, Daisy Worthington, the reigning UK indoor champion over the distance, took over 2 seconds off her previous lifetime best to record 2.14.36. She held off the challenge of rival Emily Misantoni and her time lifts her up to number 2 in the UK in the age category. Daisy, supported by Keenan Estates, has demonstrated that her outdoor form has really arrived as this follows her gold medal at the Greater Manchester championships the previous weekend.

The men’s A race was a close run affair, with a second covering the first five finishers. Ben Coop took an excellent third place setting a new best of 1.56.89 – again 2 seconds faster than his previous best performance. 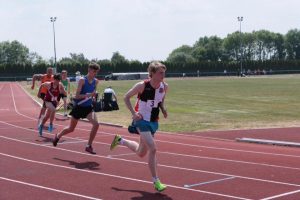 In the women’s pole vault Harriet Vaughan took second place with a best vault of 3.06.

Byron Edwards was the overall winner, in a time of 19.15 on the undulating course. Ben Jones took third place in 19.54. Katie Geelan was first woman back in 22.30 followed by second placed Sophie Hill who recorded 23.56. Making it a clean sweep was Lizzi Cheshire taking third place in a time of 25.24.

Also taking part were Alison Dale (27.18) and Brianne Turner (29.23). All enjoyed the camaraderie in the race which is one of the popular series organised  by Andy O’Sullivan. 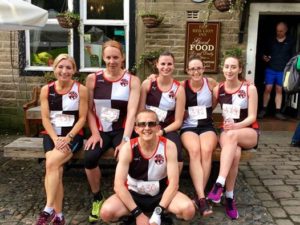