A wet and muddy Leverhulme Park in Bolton played host to the Greater Manchester Cross Country Championships on Saturday 9th January. In fact the park was so water-logged in parts that the organisers were forced to make last minute changes to the course. Bury’s strongest performances of the day came in the under 15 boy’s race. Marcus Dey ran strongly to win, shrugging off the effects of a stomach bug and holding off Keenan Owen from East Cheshire. Oliver Makinson took third place and Ben Forrest battled well to take tenth giving Bury the team victory by a clear 15 point margin over Trafford.

Francis Woodcock produced an excellent run to finish runner up in the very competitive under 13 boy’s race where just 6 seconds separated the first four finishers.  Jack Andrew (20th) and Oliver Donnelly (22nd) were the other Bury competitors in the race.

Sophie Whittaker was Bury’s sole competitor in the under 17 women’s race and she ran well to take fourth place and also secure county selection.  Similarly, Lauren Booth was the only Bury athlete in the under 20 women’s race, running strongly in the dire conditions to take 6th place. 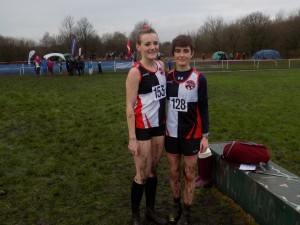 Lauren and Sophie following their race

Katie Geelan produced one of her best cross country performances to date to secure 7th place in the senior women’s race and will wait to see if the performance is enough for county selection. Christie Cook who didn’t enjoy the harsh conditions, finished 19th and Alison Dale, making her debut in the county championships enjoyed the challenge and showed how her performances are improving by taking 40th place.

In the under 20 men’s race Benn Heywood’s 8th place should be good enough for a county vest, despite being misled by an official about the number of laps. Harry Stainton ran strongly to finish 11th.

Charlotte Farnworth was Bury’s first finisher in the under 13 girl’s race in 19th place, three places ahead of Daisy Worthington.  The other Bury runners in this race were Erin Kenyon (36th), Charlotte Smith (42nd) and Ella Hall (57th).

The final race of the day was the senior men’s event where Bury’s Giles Bennett was the Club’s only competitor. The course had deteriorated into a quagmire by this stage of the day and Giles ran well to take 75th place. Ex-Bury athlete Scott Evans made the journey home to compete in the event for his adopted club Kingston AC. He demonstrated his superb talent in taking third place in a strong field and should secure county selection.