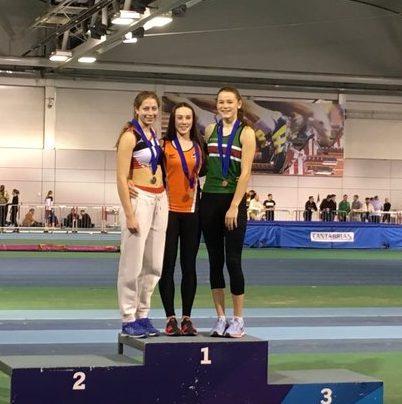 Four Bury athletes travelled over to Sheffield to compete in the North of England Indoor Track and Field Championships. The competition was for athletes from the senior, under 20 and under 17 age categories. Competing in the under 17 women’s pole vault, Hattie Vaughan built on her reputation as being one of the best junior pole vaulters in the North. Hattie took an excellent silver medal and produced a season’s best vault of 3.30m.

Patrick Clarke competed over two events in the under 17 men’s category. He took 8th place in the 60m hurdles in a new personal best of 10.35 and 10th place in the long jump final with a season’s best leap of 5.12m.

Charlotte Speakman-Farnworth took 4th place in her heat of the under 17 women’s 800m in a season’s best of 2.32.65. Daisy Worthington, the current reigning under 15 girls 800m National Indoor Champion, competed in the under 20s 400m heats to work on her speed. Running against athletes 4 years older than her Daisy performed very well to take 4th place in a new personal best of 61.56.