Two of Bury’s junior athletes travelled to Middlesborough last weekend to compete in the Northern AA’s Junior Championships. Hattie Vaughan competed in the U15 pole vault on the Saturday and took the Northern title in a new championship best performance of 3.0 metres. The vault marked a 10 cm improvement on Hattie’s previous best performance and moves her up to 9th in the UK rankings. Given this is only Hattie’s second season at the event the result clearly shows her potential and is reflection of the hard work she puts in to her training.

Not to be outshone Grace Goodsell competed in Sundays U15 long jump competition. Grace secured victory with a best jump of 5.21, just 1 cm further than the second placed athlete, Lewis from Liverpool Pembroke. Whilst the jump did not match Grace’s personal best of 5.33 set earlier in the year, her victory was all the more remarkable as she still has another year in the age group. Grace currently sits at 14th in the U15 UK rankings, but when the athletes a year older than her are discounted she counts as number 2 in the country.

Bury AC is very proud of the performance of the girls, it is the first time in many years that Bury has had two regional champions.

Earlier on in the week Ben Coop was the sole Bury competitor in Wednesday’s Pilgrims Cross fell race. This is a demanding race of approximately 10km over the moors to the North of Holcombe. Ben ran strongly to take 4th place in a time of 41.03, an improvement of 3 places and over a minute over his 2015 performance. 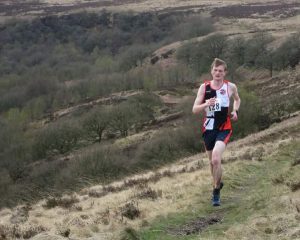 Ben Coop on the fells

The day before Katie Buckley ran the 1500m in the Trafford Grand Prix open event. Running her first track race since picking up an injury in 2014 Katie ran well to take 3rd place in a time of 4.49.71.