Jerel up to third in UK rankings

The last week has seen some magnificent performances from Bury athletes at a variety of venues and meetings.

On 25th May on the fells, Ben Coop took an excellent 3rd place in the Fo(e) Edge race recording a time of 31.42 for the demanding course and taking the scalps of several local class opponents. On 28th May Ben was racing on the fells again, this time in the Hutton Roof Crags race where he took 10th in 56.22 in the classy field.

Down at a meeting in Exeter pole vault specialist Hattie Vaughan set a new pb of 2.85m and in doing so achieved the much sought after English Schools qualifying height.

Daisy and Heledd at Loughborough

At Loughborough Daisy Worthington and Heledd Rimmer competed in the UK Javelin Carnival. Both athletes set new personal bests with Daisy recording  a throw of 20.29, whilst Heledd launched the javelin out 27.43.

At the YDL Upper League meeting at Blackburn on 29th May team manager Donna Cartwright was very pleased with the spirit demonstrated by the small number of Bury athletes who travelled to the fixture.  For the under 20s Iestyn Rimmer won his 3000m race (11.10.6) and Christie Cook set a new season’s best of 2.23.1 in winning her 800m. For the under 17s James Coghlan was rewarded with new pbs in the B 100m (12.1) and B 200m (24.2) . Teammate Hashim Shah won both sprint A races with times of 11.8 and 24.1 respectively. 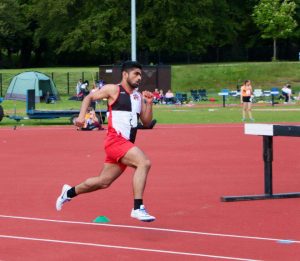 Hashim Shah powers round the bend in the 200m

Girls’ team captain Jenna Allen-Cartwright took 6th in the A 100m (14.2) but was sadly disqualified from the 200m for a false start. She showed great leadership in putting the disappointment behind her and moving on to score points in the discus and in the 4 x100m relay. Boy’s captain, Alex Bennett set a new pb of 55.8 in the 400m and Lucy Alcock set a new best time of 5.18.9 in winning the 1500m. Teegan Brady and Chloe Fairhurst performed well in their events (100m, 200m and 300m) before teaming up with Jenna to take 3rd in the sprint relay. All of the young athletes, who are primarily runners, took part in a number of field events with the star performance coming from James Coghlan with a 31.98 throw in the javelin.

Lucy Alcock leading in the 1500m

Last weekend saw athletes competing in Cheshire and Northern League fixtures and there will be more detailed reports next week.