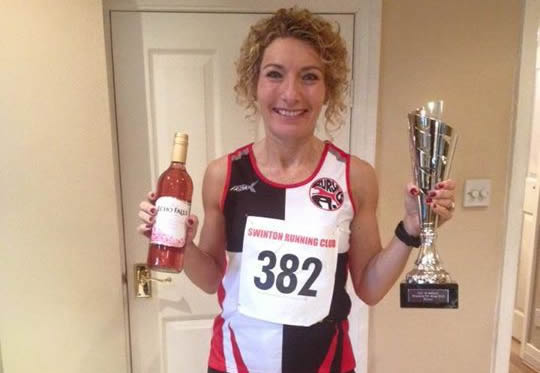 Bury athletes have been producing excellent performances across a variety of surfaces in different events over recent weeks.

In Saturday’s  British Athletics Cross Challenge in Liverpool, Ben Forrest and Sophie Whittaker took on the best young runners in the country in their respective events. Ben ran very well to take 34th place (10.34) in the under 15 boys race. Sophie similarly produced an excellent effort to finish 37th (17.39) in the under 17 ladies event.

On the same day the Bury men’s team captain, Byron Edwards, made a welcome return from injury to test himself at the Parkrun at Heaton Park. He was delighted to finish in first place in a respectable time of 18.34. Further down the field, but finishing first in her age category was Daisy Worthington, setting a new personal best of 21.27.

Daisy had teamed up with Grace Goodsell the previous Sunday to compete in the Stockport Harriers Quadrathon at Sportscity. The girls took part in the under 15’s event, their first time to step up into this age group. Grace came an excellent sixth overall with 254 points, just ahead of Daisy who scored 246 points to take 9th; personal best scores for both girls. The quadrathon tests athletes over 60m, 800m, long jump and shot putt. Grace set new pbs in the 60m (8.4) and long jump (4.52); whilst Daisy set new best marks in the 60m (8.9) and 800m (2.30.1).

Bury’s Katie Geelan ran out as a clear winner in the City of Salford Women’s 5.25 mile race, finishing in 33.41, 8 seconds clear of runner up Helen Armitage from Sale.  Given the wind and rain that was battering the athletes, Katie was pleased with her performance, enjoying the escape from the mud of the cross country season. Further down the field in 51st place was Lisa Carter (43.24).

The 15th November saw a group of young athletes from Bury competing in the second fixture of the Greater Manchester Sports Hall Athletics League. The under 13 girls team won the event for the second time, well clear of second placed Sale. There were individual victories for Charlotte Farnworth (8 lap), Grace Goodsell (2 lap and standing long jump) and Amy Garroch (vertical jump) supported with strong performances from Esme Guy, Erin Kenyon and Katherine Townsend.

The under 11 boys took second place behind Sale, with excellent performances from Elliot and Evan Savage and Jay Cook. In third place, behind Wigan and Trafford, came the under 11 girls. Abigail Howard secured a victory in the vertical jump with strong performances from Holly Crow, Matilda Brett, Erin Garroch and Freya Potts. It was excellent so many other young Bury athletes participated as non-scoring competitors.

Finally, the under 13 boys took 4th place. The team was a little depleted on numbers, but there were great performances from Patrick Clarke, Jerel Livingston and Oliver Donnelly.

Next Saturday sees the final races in the Red Rose Cross Country League up in the hills of Rossendale. Bury AC is in a strong position to win several individual titles as well as overall team titles.