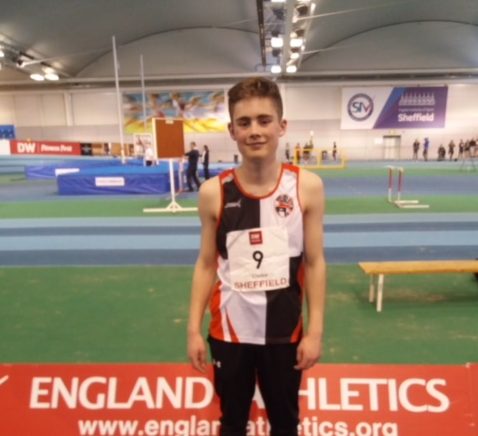 Two Bury athletes were selected to represent Greater Manchester in the prestigious Inter-Counties Cross Country Championships, held for the second time in the grounds of Prestwold Hall in Loughborough on Saturday. The weather conditions had resulted in the course quickly deteriorating into a muddy swamp, making it very challenging for the athletes. Brandon Quinton, running in the under 15 boys race, had a strong run taking 108th place in the massive field. His time of 20.09 for the 4.5 km course indicates how testing the course was. Sophie Whittaker made her debut for the Greater Manchester senior women’s team taking 193rd place with a typically gritty performance and covering the 8kms in 42.01. 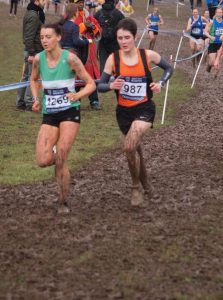 Sophie skipping through the mud

Ben Coop competed in the high quality Podium 5k at Barrowsford in Lancashire on Sunday. Such was the talent of the field that the first 10 all finished inside 15 minutes. Ben ran the fastest 5k of his life to take a very creditable 25th place in 15.34 and taking the scalp of Manchester Marathon winner Dave Norman in the process.

Five club members travelled to Sheffield over the weekend to compete in the England Athletics Combined Events Championships for Under 15s and Under 17s. Patrick Clarke and Amy Garroch competed in the Under 17 events, with Patrick taking an excellent 22nd with 3009 points in the men’s heptathlon competition and Amy finishing 333rd with 2456 point in the women’s pentathlon championship. Both athletes produced lifetime best performances in some of their events, with Patrick setting new bests of 8.25 in the 60m, 8.00m in the shot, 1.65 in the high jump, 9.78 in the 60m hurdles and 3.18.29 in the 1000m. Amy produced new best performances in the 60m hurdles (9.43) and long jump (4.80). Both athletes are making excellent progress under the watchful eye of coach Ian Halliday.

Bury had four runners in Sunday’s Irwell Valley 20 mile trail race. Byron Edwards took 1st place in the MV40 category in a time of 2:25.32. Given he had completed a 27 mile training run the day before, the performance augers well for his forthcoming marathon races.  Colin Smith was 6th MV55 in a time of 2:55.24 and Irfan Qureshi just missed the 3 hours mark, finishing 7th MV50 3:00.25. Second claim member and club volunteer Joanna Degisi finished the course in 3:24.36