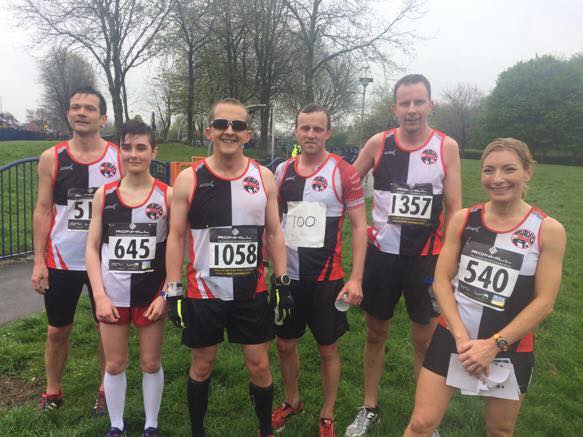 There were personal bests galore for the Bury AC athletes who competed in Good Friday’s Salford 10k. First Bury finisher in the high class field was Ben Coop who demolished his previous best with a scorching 32.36 to take 21st place. Dave Cullen was next to finish; he took 66th place with a season’s best of 35.44 only 5 seconds ahead of Byron Edwards whose time was his third pb in two weeks and giving him 7th V40 place. Matt Grice set a new lifetime best of 37.56 in 114th and was 11 places ahead of Giles Bennett who set a new best of 38.21 to finish 7th V50. Sophie Whittaker ran strongly to finish as 2nd junior female also in a new best of 38.34. Next was Chris Mackay, breaking 40 minutes with a new best of 39.19 and just over a minute ahead of young Stefan Kalambouka who was 9th male junior with his new best of 40.21.

Katie Geelan finished as 2nd F40 in 40.54 with Andy Worthington also setting a new best of 41.59 to finish in the first 200 out of a field of over 600 starters. Alison Dale took a break from coaching and volunteering to compete and took 401st place in a time of 51.04.

On Saturday three Bury AC members took on the Rivington Pike fell race with Benn Heywood running strongly to take 19th place in 19.58. Giles Bennett, undoubtedly with the previous day’s 10k still in his legs, finished 103rd in 23.50. Sean Constantine made his debut for Bury and took 133rd place in 25.09.

Nigel Brady at the Duathlon

In the Decathlon Bolton Duathlon the previous weekend Chris Mackay and Nigel Brady competed for Bury. Chris took 32nd place with a total time of 1:53.25 for the 6k run, 28k bike, 6k run event. Nigel took 69th place with a time of 2:08.14. Another athlete from Mandy Brady’s development group to focus on endurance events is Colin Smith who competed in Monday’s Boston Marathon. In his second attempt at the distance Colin finished in 4:14.44.