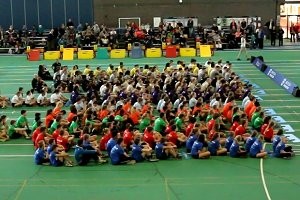 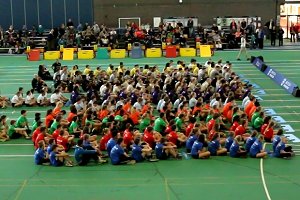 The inclement weather didn’t disrupt performances in indoor and Sportshall athletics competitions. On 10th January 3 Bury athletes competed in the Sale Harriers’ Indoor Open meeting hosted at Sportscity. All were rewarded with season’s best or personal best performances. Hattie Vaughan competed in the U15 girls 60m sprint, finishing 6th in her race with a season’s best time of 8.64. Daisy Worthington also raced over 60m, taking 6th place in 8.96; also a season’s best.

Daisy also competed in the U15 girls 200m, setting a new personal best of 29.47 to take second place. Patrick Clarke ran in the U15 boys 200m, finishing third in 28.75, a new personal best. Patrick then went on to compete in the long jump where he finished in tenth position with a season’s best leap of 4.25.

On 16th January five of Bury’s young athletes represented Greater Manchester in the Sportshall Fun in Athletics competition at Sportscity. The youngsters helped Greater Manchester take 2nd place in both the boys and girls under 11 competitions. For the boys, Elliott Savage took second place in the standing long jump with 2.04. Evan Savage competed in the javelin, where he came third with an 18m throw and the vertical jump, where he finished ninth with a jump of 38cm. Mickey Carling competed in the standing triple jump and took 10th place with a 5.44 best effort.

Abigail Howard finished an impressive second in the girl’s vertical jump with 48cm, only missing first place by 1cm. Matilda Brett took eighth place in the standing long jump with 1.80.

Bury had just one competitor in the North of England AA Indoor Championships at Sheffield. Sprinter Marvin Edwards recorded a season’s best in the 60m, placing 4th in his heat with a time of 7.23.

On the roads, Bury had two runners in the Four Villages Half Marathon organised by Helsby Running Club. Colin Smith made the first 500 and was 16th M55 finisher with his 1:39.42 effort. Lisa Carter made the top 1000 in a huge field, setting a new personal best of 1:53.13 to finish as 29th F45 competitor.