2017 proved to be very successful year for Bury AC. The club produced one of its strongest performance seasons for many years and with membership levels reaching record levels; increases in coach numbers; improvements in the facilities and strengthening in partnership working things are going from strength to strength for the Markey Street based club.

January saw some excellent individual performances in the Greater Manchester county cross country championships. Oliver Makinson and Marcus Dey took 3rd and 4th place respectively in the under 17 men’s race and Sophie Whittaker took 3rd in the under 20 women’s event. All three were selected to represent the county.

February had even more excellent cross country performances at the county schools’ competition. Francis Woodcock won the junior boy’s race, with newcomer Brandon Quinton taking an excellent 3rd place. In the intermediate boy’s race Oliver Makinson took 2nd with Marcus Dey hot on his heels in 3rd. Sophie Whittaker, in her last appearance in a schools cross country competition, took 3rd in the senior girls’ event. All five were selected for the English Schools competition later in the year.

The club had a great turn out in the Northern Athletics indoor championships for junior athletes. Grace Goodsell made it a double gold in winning the 60m and long jump under 15 girl’s events whilst Daisy Worthington won the 800m in the same age group. There were also excellent performances from Jerel Livingston, Jay Cook, Katherine Townsend, Amy Garroch, Erin Kenyon, Abigail Howard, Charlotte Speakman-Farnworth and Patrick Clarke.

In March, Daisy Worthington took the national indoor title over 800m in a perfectly judged tactic effort, setting a new lifetime best of 2.16.41 in the process. Hatie Vaughan took 8th place in the under 17 women’s pole vailt competition with a best vault of 3.20.

For the seniors there was a double victory in the Terry Nortley Multi-Terrain 10 mile race with Ben Coop winning the men’s race in 1:00.02 and Katie Geelan winning the women’s race in 1:13.28. Down at the Inter Counties cross country championships in Loughborough Sophie Whittaker was part of the silver medal winning Greater Manchester team in the under 20 women’s race. Sophie also won a team medal in the English Schools cross country championships in Norwich. Other Bury athletes who competed in the prestigious event were Marcus Dey, Oliver Makinson, Francis Woodcock and Brandon Quinton.

In April’s London Marathon Bury’s Jim Ardin and Byron Edwards were both comfortably inside the 3 hours mark with times of 2:49.28 and 2:53.06 respectively.

The Track and Field season got underway in May and at the Greater Manchester championships Bury athletes won plenty of medals. Grace Goodsell took 4 golds in the 100m, 200m, long jump and high jump. Daisy Worthington won the 800m and 75m hurdles. Jerel Livinston won the long jump and Hattie Vaughan the discus. Christie Cook took a bronze in the senior 800m whilst younger brother Jay took bronzes in the high jump and discus. 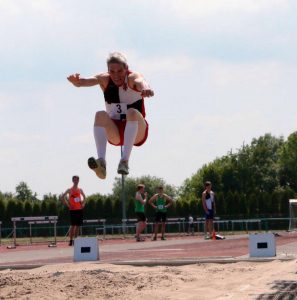 July saw a record number of Bury athletes competing in the English Schools Track and Field Championships in Birmingham. Hattie Vuaghan took 6th place in the intermediate girls pole vault in her first year in the age group. Daisy Worthington was disappointed with her 7th in the junior girls 800m final. Brandon Quinton, who has showed remarkable improvements in his first full year in athletics, did brilliantly to take 9th in the junior boys 1500m final. Jerel Livingston took 9th in his junior boys long jump heat.

In August Dasiy Worthington and Amy Garroch competed in the National Combined Events Championships at Sportcity. Daisy excelled and took 3rd place in the hexathlon and the rapidly improving Amy did well to take 20th in a really high quality field.

Bury also had four athletes competing in the National Championships in Bedford. Hattie Vaughan took 5th place in the pole vault (3.31)  and Brandon Quinton and Daisy Worthington both took 7th place in their respective 1500m amd 800m finals. Grace Goodsell made the semi-final in the 100m and took 13th in the long jump.

Brandon at the Nationals

In the various league competition Bury performed well over the season. Brianne Turner, in her first season as Cheshire League team manager, led the club to 3rd place overall. This is the strongest performance in nearly 20 years, Giles Bennett was delighted that the Northern League team was able to consolidate its place in the second division. Helen Vaughan, manager of the Youth Development Lower team was pleased with the 3rd place secured by the Bury team in a challenging division.

In September the transition from track to road running takes place. In the North West Road Relay championships in Blackpool Brandon Quinton set the fastest stage time in the under 15 boys race, confirming his newly acquired status as one of the best young runners in the region. In the Asda Foundation Bury 10k there was a double Bury AC victory with Ben Coop winning the men’s race and Sophie Whittaker the women’s. Ben built of his fine form, winning the Rochdale Half Marathon (1:12.12) and the 13 Arches Half Marathon. 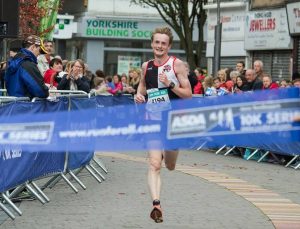 Ben on his way to the line

In the final track and field competition of the season, The Northern Masters, Bury had two champions with Roger Morley winning the triple jump and Giles Bennett the 400m.

Bury athletes have continued to perform well throughout October, November and December in cross country and indoor athletics events. All is pointing to an exciting 2018 for the club who will host the Greater Manchester track and Field Championships in May for the first time in the club’s history.