It was a small group of athletes who made the journey to Oldham for the third YDL Upper fixture. There were no Bury competitors in the men’s under 20 events but three women competed. There was a double victory in the 1500m with Sophie Whittaker winning the A race in a new best of 5.05.1. Lauren Booth won the B race, with her time of 5.24.5 only a couple of seconds away from her pb. Chelsey Lee took 3rd in the 100m with a time of 16.0.

Bury had a larger group of under 17 athletes and Team Manager Donna Cartwright was delighted with their attitude to competition. It was double for Bury in the 100m with Hashim Shah winning the A race (11.8) and James Coghlan taking the B (12.2). The competition was too hot for Hashim in the 200m and he had to settle for 4th in the A race (24.6), but James made it a clean sweep in the B, winning in 24.6.  James then went on to take 3rd in the javelin with a best throw of 30.39. Marcus Dey ran an impressive new best of 2.07.5 in a very competitive 800m and took 2nd place. Oliver Makinson dominated the field in the 3000m winning easily in a new best of 9.32.5. The four young men then combined to compete in the 4 x 100m relay, where they ran out as winners in 49.2. 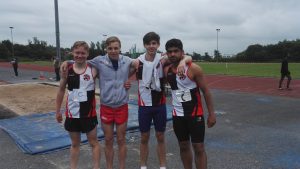 The overall impact of the effort gave the Bury team 5th place.