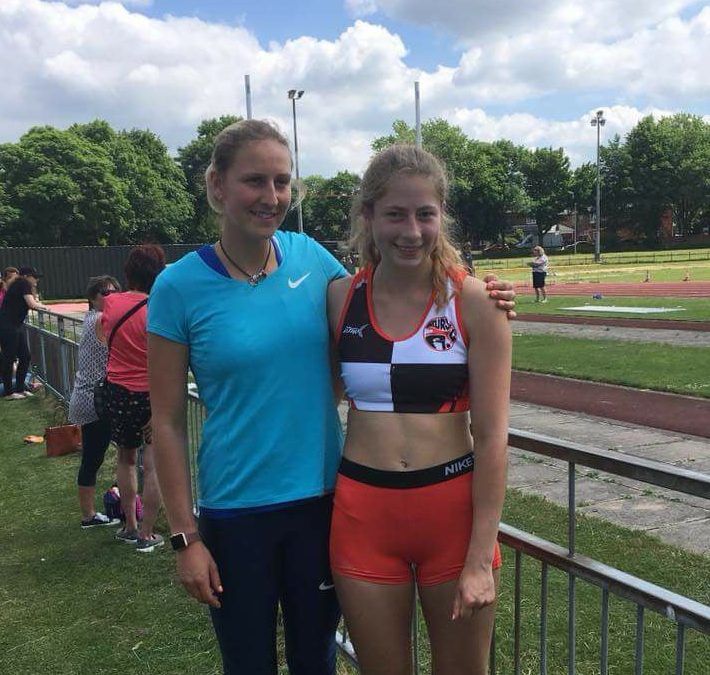 Bury AC hosted the second of the four North of England Track and Field League meetings at the Market Street track on Sunday. Team Manager Giles Bennett had worked hard on team selection with the intention of improving upon the 5th place achieved at the opening meeting of the season at Blackburn. However, despite a great team effort Bury could only finish 5th again, frustratingly only 3.5 points off 4th place.

The highlight of the day came in the women’s pole vault where teenager Hattie Vaughan, taking a break from her GCSE revision, faced stiff opposition in the form of Holly Bradshaw a former GB athlete and Olympian, competing for Blackburn. Hattie notched up a memorable victory, her 3.10 of a short run up bettering Holly’s 3.00m best vault. Afterwards Hattie was full of praise for the international athlete who provided her with help and guidance throughout the competition in the true spirit of sport.

Andy Worthington made his pole vaulting debut, notching up a victory for the men’s team and it was good to see youngsters Amy Garroch and Katherine Townsend making their league debuts and scoring much needed points.

The day before a small squad made the long drive to Wrexham to compete in the second Cheshire League fixture of the season. With most of the seniors missing due to Northern League commitments the following day, it was down to the youngsters to uphold the clubs pride. What the team lacked in numbers they made up for in spirit with some great performances from Jay Cook, Gil Vaughan, Noah Carter, Grace Gibson, Millie Uprichard,  and Connie Potts to name but a few of the team. Brianne Turner, the team manager, was delighted with the team spirit, particularly in the relays.