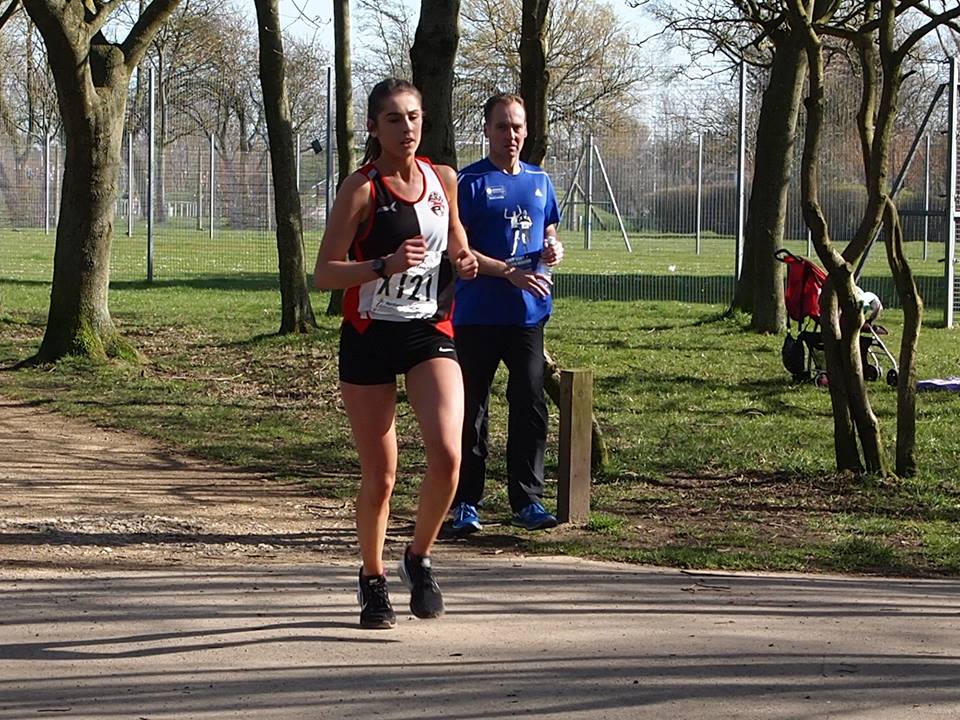 A large group of Bury athletes enjoyed the sunshine in Blackpool’s Stanley Park as they competed in the Northern Athletics Road Running and Road Relay Championships. In the women’s six stage race the Bury A team performed strongly to take 16th place out of the 50 complete teams that finished. On the first leg of approximately 10k, Katie Geelan’s strong run of 38.58 brought the team home in 21st place. Katie handed over to Jenny Yates for the next 5k stage and Jenny ran a strong 21.50 but dropped two places. Nicola Harland took the third 5k leg and her 22.36 effort moved the team up to 20th. Caitlin Cole, returning from a long injury, took the fourth long leg and moved the team up to 16th with a time of 40.08. On the fifth leg was Christie Cook, posting the fastest time out of the Bury team with 21.01 and holding on to 16th place. Sophie Hill, making her debut for Bury, ran well to keep the team in 16th place but her time of 23.13 was just not enough to close the gap on the tiring Rotherham athlete in front of her. 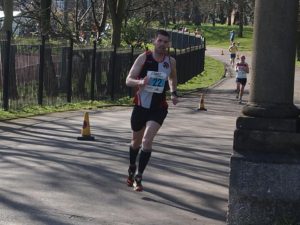 Dave Cullen powering round the course

The men’s race comprised of 12 stages with the first, third, fifth and seventh legs being longer. Ben Coop took the first leg, bringing the team back in 27th place with his strong 31.53 effort. Ben handed over to triathlete Tony Cullen whose 18.22 leg brought the team home in 29th. Jim Ardin ran the third leg but despite an excellent effort of 32.54the team dropped two places to 31st. Jim handed over to Jack Griffiths who managed to claw back one place with a 19.02 leg. Next was team captain Byron Edwards whose brave run of 35.10 saw two athletes get passed him but Benn Heywood pulled the team back to 30th place on his 19.10 leg. David Cullen produced his trademark strong run on the last of the long stages with his 33.48 effort taking the team up to 28th. Pierre-Louis Statsenko ran the eighth leg and his 19.35 performance brought Bury back in 29th position and that was held by Matthew Grice with his 19.56 leg. Young Iestyn Rimmer ran his leg in 21.21 and could not hold off the challenge of three teams passing him. Chris Barrow took the penultimate leg and his 20.52 effort saw him hand over to Andy Worthington in 35th place. Andy covered the final leg in 21.18 bringing the team home in 36th place out of the 61 teams that finished complete.

The event also incorporated the 5k championships for under 17s and under 15s. In the under 17 men race Marcus Dey took an excellent 6th place (16:15) finishing one place ahead of team-mate Ollie Makinson (16.24). Sadly Bury could not field a third athlete in this age category and so the young men missed out on the opportunity of winning a team medal. 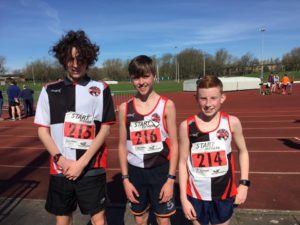 In the under 15 boys race Bury fielded a team of 3 athletes.  Brandon Quinton ran a very strong race to take 10th place (17.26) supported by Stefan Kalambouka, who continues to show good improvement, in 20th Place (17.55) with third counter Oliver Donnelly in 34th (18.40). The boy’s took 5th place overall only missing out on 4th place by 2 points. Heledd Rimmer was Bury’s sole competitor in the girls race taking 23rd place in 22.04, a time nearly 2 minutes faster than her previous best for the 5k distance.

On Sunday the father and son duo of Colin and Jack Smith competed in the Cheshire 10k at Arley Hall. This was Jack’s first outing over 10k and he recorded a time of 46.25 and took family honours by beating his dad by some 21 seconds.